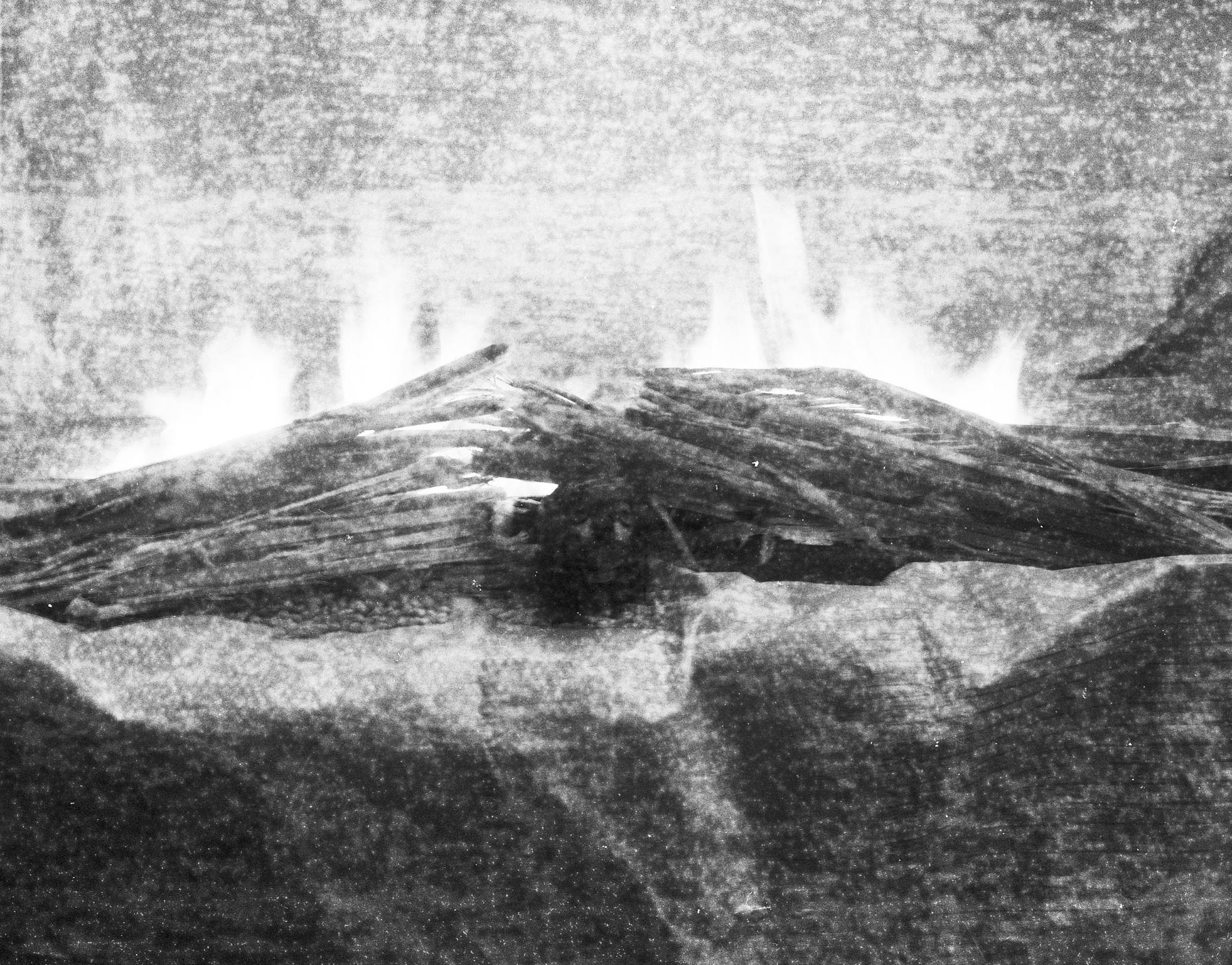 Instructions: Add text/image/video before or after the following text. You may continue sentences if they are left unfinished. No need to mention your name (the idea of a cadavre exquis is to have an anonymous final work).

You and a large group of people were sent by Earth to terraform a lifeless purple planet in another galaxy. You were cryogenized on the way there and slept for the entire duration of the journey, about 100 years. You arrived on the new planet and received a newly invented ‘immortality’ treatment, which regenerate your cells and ensured that you would live, if not forever, then at least 1,000 years. The new planet bore no resemblance to Earth in either landscape or climate. You set about terraforming it. What that means is that you were part of a huge human effort to re-imagine a bare planet in a way that it responds to both human needs and its own logic. You became a ‘native’ of this planet and lived for 2 centuries on it, creating an ecosystem which you and your group consider their home. In the meantime, Earth had degenerated into the chaos which largely corresponds to the worst provisions of climate disaster: floods and droughts for the poor, high mountain castle dwelling for the rich.

200 years after you first arrived on the purple planet, you are requested to return to Earth on a diplomatic mission. Space travel is now faster so you reach the blue planet in under 30 years, 29 and a half of which you spend in hibernation. It is now a few days to landing and you are awake, observing Earth from your spaceship. You get closer and closer,…

As the ship was pulled closer to the Earth my mind seemed to be traveling in the opposite direction. I was mumbling to myself, and chanting a work song from Serena, the purple planet, that awoke a specific muscle memory, “øm cha cha oooo cha øm chach ooo chacha.” I recalled stacking the first bags of soil that would become the foundation of our temporary earthship on the purple planet–crouching to heave the heavy soil sack onto my shoulder, then propelling myself forward with my back foot to pass the burden on to the next in line.

I opened my eyes and peered through the ship’s window, viewing a tiny Earth in the distance. I could only perceive an almost homogeneous surface to the planet. No differences between materialities, nor colors. Water, earth, air? I wondered if that homogeneous surface was a sort of neutral state without movement. Fixed, still. Would language on earth sound also like “homogeneous” ?

When the ship was close enough for the contours of Earth’s coastlines and storm systems to come into focus, I felt a mix of fear and joy. Can one feel nostalgia for a home that has been destroyed? Wondering what the first encounter of my foot with Earth’s soil would feel like, I put myself in the mindset of trying to “remember” language. Yes, I belonged to the earth 200 years ago but… what would the word or the feeling of “belonging” mean?

A kind of unknown anxiety appeared as arrival became imminent. I knew that feeling on my chest, I remembered it.

Our vessel stopped inches above the muddy ground. As I was moving towards the exit it gently opened one of its doors and wished me welcome to Earth by humming an ancient melody. It was Eleanor Rigby, suiting my mood of anxiety and apprehension. Died in a church and was buried along with her name. Nobody came. Was Earth going to be a burying ground? Certainly the amorphous landscape I had embraced with my eyes from the ship was not a sign of possibility.

Yet, many decades ago, when landing on Serena, I had observed its strangest landscape from our ship, bearing the same lack of clear shapes and colors as earth presented now. We had explored it extensively before deciding to terraform it, and we all knew it was just going to be a mass of rock with a purple tinge. I thought of the bay now unfolding in front of my house: not only had we stabilized Serena’s atmosphere, we had also given it an ocean and several lakes, and beautiful greens calmed the eye as it would follow the uncertain curves of the hills. It had been a scary place because of its shapelessness, its lack of definition. Earth had always stood in stark contrast, taunting us with its majestic mountains and steep valleys, its intricate jungles and mirror-like lakes. Only many years after leaving Earth behind had we been able to think of Serena as a distinct entity and create on it the world it called for: our world, our home.

We had detached ourselves from Earth and now most of our people had not even been born on it. The new generations only knew of this original matrix from newsreels which showed the continuous natural disasters that had plagued it for decades. I was myself far removed from its issues, so seeing its familiar contours from the spaceship, only deprived of its lush greens, gave me an eerie sensation of longing for something that not even Serena could bring me back.

Nonetheless, it is important to notice that:

But I wish I could stop there. I wish it was the only work to do.

My fatigue is extreme.

All the effort to terraform Serena had cost eons of study, project and people management, endless meetings, consulting, and innumerable lives. Body after body – witnesses of the initial destruction of Earth who had been the first outliners of Serena, but could never see its future prosperity.

Prosperous and rich though Serena is, I still dream of Earth. No matter in which part of the galaxy I am, it is everywhere I look.

My own criogenization reminds me of my life there. It brings objects, faces, plants, smells, people…like my grandmother’s facial lotion.

L’Oreal. She had the softest skin.

I loved reading packaging labels in her bathroom.

When I was a kid, none of these magical words reminded me of

That confusedly helped me sign the pledge of ignorance.

Deep down we knew.

We just thought it would be later.

Everything was intertwined when Earth liferupted

Titanium in the stomachs

It had already been written in spams and bibles

How we would perish among Cup Noodles

In the middle of washing powder’s promises of a stainless better world.

Which is funny because washing powder companies always needed dirt to sell cleanliness.

Someone needed Earth to be destroyed.

Serena is the promise of a clean new world.

Serena and Serena’s Way of Life.

Serena and its zillionaires.

This is where we are:

We need to get back to Earth and sell the new planet to the survivors.

Where dreams are destroyed so new ones can be sold universally

My work consists in selling the terraformed planet’s real estate to the last habitants of the destroyed planet. Each real estate agent draws a list of potential clients to visit around the world. For marketing strategies, we built a software that displayed the client’s hometown as it was before being destroyed – as emotional attachment means good selling. That way, we would be able to replicate people’s past lifestyle in the new planet, and suggest possible ameliorations. They can choose to live in an exact copy of their old place (or another). A matrix of their own memories.

This way, Earth’s armageddon would be nothing but a distant, annoying dream.

The software shows a catalogue of regions worldwide so people can see other options of real estate. This is how today’s catalogue looks.

Consider the abundant diversity that borders the roads.

Nothing is connected to everything;

everything is connected to something.

Domination, domestication and love are firmly

Wandering in the murmuring forest, under tall trees and giant flowers.

Not a bird, not a cell, not an immigrant, not a capitalist.

The thought of the tremor explodes everywhere.

In fact, in the early days, Chaos was born, the Huge-Abyss- and then Gaia, The Earth with wide flanks – and Eros, who is the most beautiful of the gods.

As for the Earth, in the first place, it gave birth, like Uranus itself, to the starry sky (he had to be able to hide it, envelop it entirely).

Gaia is the name of an unprecedented, or otherwise forgotten, form of transcendence:

a susceptible agency of forces indifferent to our thoughts and our projects.

It responds neither to fear, nor to doubt, nor to uncertainty.

It is the seismic thought of the world that flutters inside and outside us.

To survive in a ruined universe is to let oneself be crossed, to allow oneself to be inhabited by the increase in life produced by the ancestors, by the animated ones – animals, plants and peoples of the infinitely small – and by the elements:

the power of shadow and humus,

Blow with different blows, with the same impulse.

Transform our imaginary, transform our suffocations into breaths, blow into the Isthmus and the Great Passages.

Our life begins with a (first) breath and ends with a (last) breath. To live is: to breathe and to take in its own breath all the matter of the world.

Last edited 2 years ago by michael
0

Evoke The past is a part of time. To imagine a different future is to understand the cycles of experiences and aspects of human adventures. Going back in time is a way to thoroughly clean old structures so that a “new” one can be reborn. To dive into this process as beings that we are here evolving with this cell called Planet Earth is to question life. The way of life and indigenous science offers a very natural and ancestral relationship: in the simplicity of mystical power, human existence and the four elements (earth – fire – air – water) are connected. Their cultures and way of life generate a balance between being protective of the forest and being cared for it. We are children of the earth and as such a part of her, which gives us what is necessary to survive and we will return to it in… Read more »